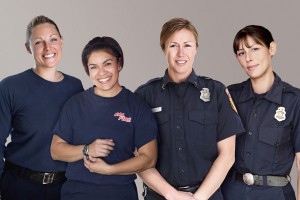 “Lives on Fire” takes us inside the extraordinary worlds of four female firefighters who risk their lives every day to take combat California’s most dangerous disasters.

As members of CAL FIRE, one of the nation’s largest emergency response fire departments, these remarkable women are always ready to battle against nature’s most unforgiving forces. Viewers witness the drama, action and danger of their jobs as they respond to life and death situations.

With the ending of each shift, these women also open the doors into their personal lives as they strive to balance being mothers, wives, girlfriends and daughters with the demands of being a firefighter. Viewers will follow four very different women including Nica Vasquez, a mother who has 15 years of experience working in the service as a fire apparatus engineer; Rose Grier, who is in her sixth year as a seasonal firefighter working to become permanent; Michele Dyck, a fire apparatus engineer with eight years of experience who adjusts to a transfer to a new station in an area known for its dangerous cliff and open water ocean rescues; and Diley Greiser, a mother who is in her seventh year as a firefighter and paramedic who delivers medical care to patients on site at all kinds of incidents.

In the premiere episode, Rose begins work at a new station in San Diego County and is immediately challenged to prove herself on a difficult call at a remote residence where she must help save the life of an unconscious grandmother. Diley, who has just transferred to one of CAL FIRE’s busiest stations in Riverside County, successfully extinguishes a freeway car fire with her crew, but is later tested by an early-morning call to a flooded warehouse.  Also in Riverside County, Nica and her crew are dispatched to a residential wildfire, where she expertly operates the fire engine pumps delivering water to her crew and helps protect nearby houses. Meanwhile, Michele in San Luis Obispo County (and her crew) get an unwelcome call that a body has been found in San Luis Obispo Bay and that they are needed to assist the coroner and Harbor Patrol in its recovery and assessment.

“Lives on Fire” is produced for OWN by BBC Worldwide Productions.

LINK TO A PHOTO OF THE “LIVES ON FIRE” PARTICIPANTS